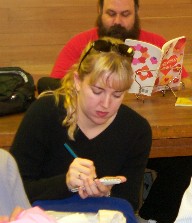 On April 6th, 2001, BARF was featured on the front cover of the Friday section of the San Francisco Chronicle. As a result, at the April BARF meeting, instead of the normal 16 or 17, we were inundated by more than fifty folders, who spilled into the basement of the library. The room was filled to capacity and we even had to pull out a baby round table to just barely accommodate everyone. In fact, the room was so packed that we nearly ran out of oxygen and people started getting NAUSEOUS! Luckily we managed to wrestle open a rusty window and we even opened the emergency exit door.

Above is a 2-page version of the article, which I pulled off the web and reformatted to look something like it did in the newspaper. Below is the original web article.