Instructions for folding from a rectangle:


You also need to be able to fold the mirror image version, which is the same to step 12, but then proceeds like this:

Instructions for folding from a square:


You also need to be able to fold the mirror image version:

Units fit togther by putting the point of one unit into the pocket of another, as in this example:

A single unit almost folds into a tetrahedron by itself: But to keep it in place you need two units, of opposite parity, which fold around each other:

And then you can make lots and lots of them:

Images of tetrahedra and octahedra:

And here is the final icosahedra from another view. This icosahedron is made from sheets of A4 paper. There is also a picture of an icosahedron made from the units made from squares in the set of pictures below. 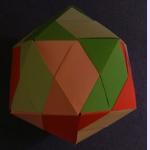 This icosahedra is not very strong when made from paper. But made from sheets of A4 card, with a little glue perhaps, to hold some of the points in place, it is quite a strong model. Or, as an alternative to glue, instead of having the points stick into the upper opening, bend them downwards into the pocket with opening in the same place, but facing the other direction.

Some more shapes you can make with this unit (click on image for a bigger picture).

Icosahedral box (click on image for a bigger picture).
This page transfered to http://make-origami.com/HelenaVerrill/home.php in May, 2015.